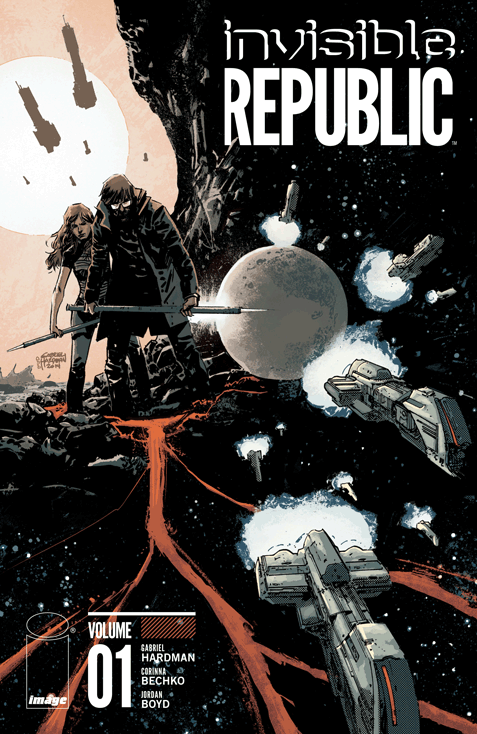 UPDATE: After I leave a positive review of their book, both @GabrielHardman and @CorinnaBechko blocked me on Twitter. Very weird. Do they not want positive reviews of their book, or people reading them? Do they just block reviewers? Is there a worse intention of that blocking there because of my whistleblowing of the comics industry’s bigotry? If someone would like to message them and ask, I’d like to clear that up before leaving endorsements of them up!

A fun fact is I used to do a series of comic reviews on the website True Believer Reviews, and had interviewed a lot of great comic writers from 2009-2013 or so. My own writing took precedence at the time, but now I’ve learned to knock out reviews pretty quickly, and with a comic-based audience, I figured I’d pick that back up again, true believers, so we can discover fun and interesting reads together. I’ll be doing trade paperbacks only for the most part, as I find pamphlets to be mostly pointless in comics these days.

But you’re here to hear about Image Comics’ invisible republic by Gabriel Hardman and Corinna Sarah Bechko, which I picked up after seeing a positive review on my favorite reviewer, The Injustice Gamer’s, blog.

This is a story of a person on the fringe of a revolution who seemed to become a sorta political legend over the course of the years. A reporter finds the journal of this woman, Maia Reveron, who had apparently written it decades before. A story goes in tandem of the reporter getting into trouble as he uncovers the secret of the revolution in the past, with some bad folk out there not wanting this information to get out. In the story from years earlier, Maia goes on the run after she killed some soldiers, or was blamed for it as her cousin was the one who was a bit more brutal in it. Their adventures continue as both go on the run and…. Well, that’s about it.

The internal pacing is very fast. I kept turning pages and couldn’t wait to see what happened next, however that pacing led to what most readers are probably thinking who finished the last paragraph: extreme decompression. We’re 6 issues of a comic in, over 100 pages, and it feels like we just got through the introduction. It’s laid out like a movie storyboard with a single scene nearly taking a whole issue to get through. It’s cinematic – that’s good, and also bad as I still don’t know how to appropriately judge the story. It could be good, could be bad, could be in between and I’m going to have to wait until subsequent volumes to really find that out.

What I did read was fun, I will give it that. I was expecting more of an interstellar epic, and we got something confined to a world without starships and the like that I would expect from a grand title like Invisible Republic. I’m also not sure what the title means at this juncture. We know there was a rebellion, we’re not sure what they were rebelling against. We know that there’s a reporter who’s in some danger for looking into this, but not much of the actual details about who’s giving the danger. I would like to know more out of a whole volume like this, but I do understand it’s to be continued and a lot of these questions could be resolved later, so for now, I will give it the benefit of the doubt in that regard, as I did have fun reading it, and that’s very important in a comic.

The art is beautiful. I love every aspect of it from the cover design to everything inside. And that goes for the coloring too. I think the subdued color scheme sets the mood of this book and is pretty important. I wasn’t aware of Corinna Sara Bechko before this, but I see she’s done a lot of Star Wars art (including some books with Gabriel Hardman in that) so I’m interested in checking that out. Both the creators certainly have their space opera cred down.

Overall, I think it was worth a read. I gave it 4/5 stars on goodreads as I would have liked more of the story to unfold and a bit more to latch onto in the world building, but this is some sci-fi to watch out of the comic industry. I have ordered volume 2 and will post a follow up review once I read that.