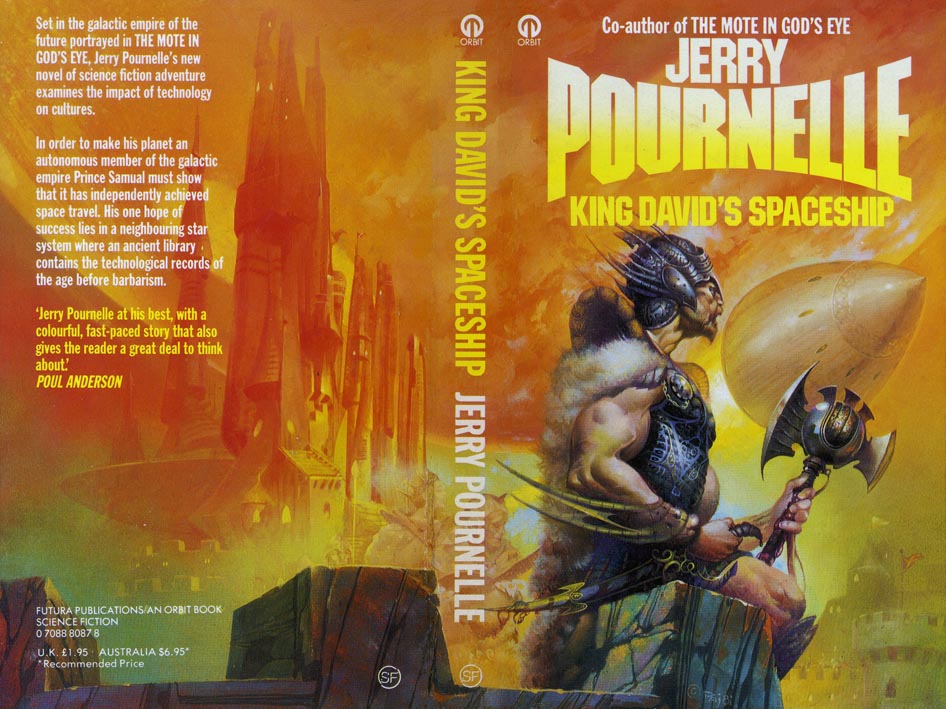 Last week, like many, I was saddened by the news that Jerry Pournelle died. He was one of the giants of Science Fiction, so prolific and really having done so much for the genre. I hadn’t in the course of my readings, read King David’s Spaceship, however, and so I figured I would honor his prolific and fruitful life by remedying that, of which I spent the last week doing.

King David’s Spaceship is a story about a fallen human imperium which is slowly reclaiming worlds that have lost technology, been disconnected, in an effort to never have a devastating war between humanity again. All new worlds get monitored and brought in according to 3 classes: class 1, class 2, and colonies, and the colonies end up getting flooded by imperial merchants and the like who take over society. King David wants none of this so he sets about a team of people to figure out how to get to the class 2 status.

They’ve determined the way to do so is build a spaceship, but they don’t have the technology to do so. Colonel Nathan McKinnie among others are sent off to another planet to go find some sacred library that is supposed to have information on the ship.

The opening of the book was interesting, but it slowed down a bit significantly into discussions of how things were going to happen. I wasn’t sure about the book after part I as to whether I liked it or not, but it turns out Pournelle was just setting the stage for part II which is all epic adventure.

When it gets into part II, it really becomes a fantasy novel — kind of a book within a book. There’s epic battles, barbarians, pirates, great politics with the church, a lot of fun all around. The world building is so deep and so rich it’s incredible, some of the best I’ve ever read. Pournelle spent so much time working out every detail of multiple civilizations that it’s staggering, a true master of the craft.

And it’s all smooth sailing (or spaceship flying!) from there. The book becomes compelling, the side characters even get wonderful moments in the limelight and are well developed. It becomes very difficult to put the book down at that point, and when it ended, I found myself wishing it didn’t. I love the wrapping a fantasy adventure in a sci-fi novel and it does come back to the sci-fi elements.  Really a neat and imaginative work all around. If you haven’t read Pournelle and would like to, this is an excellent place to start.