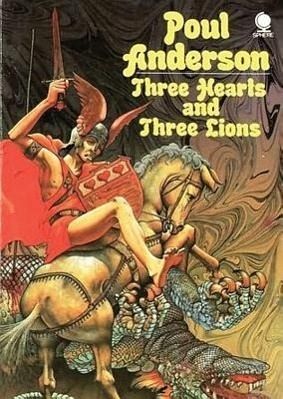 Once more I delve into my own study of the works of Appendix N and the #PulpRevolution, hopefully not to be too redundant with Jeffro Johnson’s wonderful analysis of the works, as I’m more interested in exploring a literary genre to see what I can pull of value for my own storytelling and reading edification, rather than tapping into the roots of gaming and what it brings to the table in that regard. I mentioned last week that I had read Poul Anderson’s Fire Time, which I found to be an extremely compelling book, so much so that I put aside other reading for a quick romp to follow up on Mr. Anderson’s work – as this book clocked in at about 160 pages, and I happened to have a copy.

Three Hearts and Three Lions follows the trope of someone in a traumatic situation getting thrust into a medieval fantasy world. Poul Anderson is pretty self aware of what it’s doing, the main character even referencing A Connecticut Yankee In King Arthur’s Court at some point. The work blends some of the later sarcastic humor of genre tropes that one would expect to see from the 1970s-1980s even though this was originally published in 1951, which I give Mr. Anderson credit for.

I’m interested to see how many times Poul Anderson uses the “story within a story” concept, as both Fire Time and this have it in common, layering something at a later time to go into the tale of how the characters arrived there. I actually enjoy seeing that in the prologues and epilogues, as it makes them feel like a different aspect of storytelling, which is what those words are supposed to do, rather than just a “before” and “after”.

Holger finds himself in a fantasy world where he goes from one town/quest to another. If this were written in the 80s, I would say this is someone’s loose D&D one off compaigns strung together into a single book, and as I said, a lot of these stories hit on tropes that you’d expect to find in such books. It reminds me of when Robert Jordan meanders into Rand doing X or Y in some village and completely putting his main story on hold to explore their problems in the Wheel Of Time, or rather I should say that annoying bit of epic fantasy there is an extrapolation of this.

The character of Holger is worth reading, however. I like how he holds to some morality, gives into base sins at times which would be hard to avoid (I mean… let’s be honest, anyone would give into the hot faerie chicks from time to time), and I also appreciates how he holds the real woman he cares about to a higher standard to where he won’t simply frolic with her, even though she’s more than willing – the sign of a true relationship and partnership. Very real characterization from a 1951 book at that.

You’ll find pretty standard things in the book: dragons, werewolves, obscene magics, trolls, and the like. That it’s a quick read makes a lot of those readable and redeemable. If this book were double the length I don’t know that I would have enjoyed it, and though I’m talking it down somewhat, I did enjoy it. Out of 10 (as Amazon’s five star ranking really leaves little room for differentiation) I’d still call this a 7.5 overall.

Jeffro pointed out that this book probably gave the inspiration for alignments, as there is a greater battle between Law and Chaos going on in the book, with people choosing sides. He also mentioned that the troll as a monster and the way it’s handled in the D&D game likely stems from here as well. And that historical context makes it pretty neat.

It’s worth a read if you need to kill some time in between books, but I gather there is better Appendix N work and Poul Anderson work worth exploring first.