I’ve been promising a review of this book on social media since before the weekend. This is the original Tarzan Of The Apes, Edgar Rice Burrough’s classic 1912 novel that spawned more than twenty sequels, endless comic books, a ton of film adaptations over the years, and for the crime of being a true man’s adventure novel, erased from modern literary discussions. Like most of the old pulp adventures, instead of celebrating what they did for the culture, they’re treated like theyr’e worthless. Tarzan was, in the 1910s-1940s, bigger than Superman, bigger than Batman. Those future writers were influenced by ERB’s works.

It drives home the point that the #PulpRevolution and #AppendixN crowd has been beating on their incessant drum for months: having action adventure in a man’s world has been held down purposefully for decades.

I picked up the “Barnes and Noble Classics” edition of this at a used bookstore going out of business for a low low price (as well as about 10 other Tarzan books).  In this, it’s almost like they didn’t want to admit it was a classic or something worth reading. First of all, look at the cover: 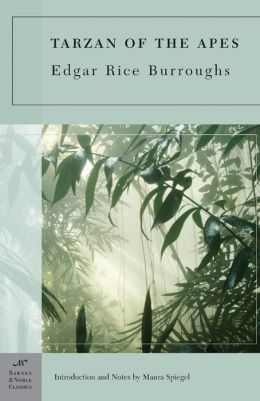 If you’re familiar with my blog, you might have seen me post this as a “worst cover ever” consideration when I bought it. It says nothing of the book. It evokes images of someone sitting around drinking mint tea and farting about how literary they are. This is not Tarzan.

Then there’s the introduction in here, by a woman who is a sociology professor or something of the sort. The whole intro is devoted to slandering and talking down regarding Edgar Rice Burroughs — she even does the ridiculous internet argument tactic of tying him to Nazis. Ironic, as he spent most of the war as a correspondent writing about American patriotism, after he survived the Pearl Harbor bombing. It also talks down about pulp fiction and how it “differs from” literary fiction, of which she gives a long list of negatives that are anything but. The introduction is a disaster and a disgrace. Between that and the emotionless cover, it screams to readers “DON’T READ THIS BOOK WE ONLY PUBLISHED IT CUZ HISTORY!”

Dear Readers, read this book. There’s a reason it was history. This was some of the most fun reading I’ve ever done. It grips you from the start. Tarzan’s parents have a great backstory that begins. As he battles for his life and place with the apes, it’s fantastic. As he deals with savage cannibalistic tribes it’s sensational. As he meets stranded Englishen and the classic, iconic Jane Porter, it gets even better. the lengths that Tarzan will go for his love is romance in the truest sense, in the most passionate. And oh, the ending doesn’t wrap up neatly at all. It demands a sequel immediately.

The characters are great and distinct. You can’t put it down once you start going. It’s unbelievable that this came from 1912, and goes to show that there certainly was no such thing as some enlightenment in the 60s-70s to produce better fiction. The people of this time were not dumber, no less of worthy writers than now. In fact, ERB’s vocabulary seems leaps and bounds above the treetops of most modern works of fiction.

I have been reading Princess of Mars to my son, and compared. While Princess of Mars has a lot of cool world building elements that really show the depths of ERB’s imagination, I think Tarzan as a character and tale actually exceed the work. It’s tighter, it’s more gripping, it’s more ageless.Were it not for the historical revisionists of the poo-poo literary establishment getting rid of all pulps out of sight out of mind, propping up degeneracy like Lolita or utterly dry boring realism that Steinbeck, I think this may actually be the seminal, Great American Novel, or I should say, I think this certainly is the seminal, Great American novel.

I’m not going to detail it through, as though you are vaguely aware of many points of the stories, I believe that the details should be discovered for yourself. It’s short, and it’s worth reading immediately. It’s certainly bumped some off the list of my Top 10 favorite books of all time.