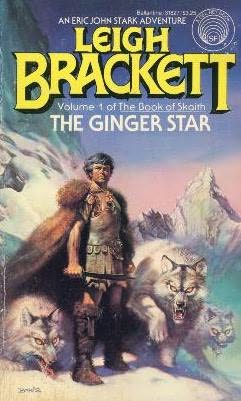 I discovered Leigh Brackett, like many of the books I am reading recently, through Jeffro Johnson’s analysis of D&D’s Appendix N. While this book was not the one listed as an influence for the game, it was the only one my local used bookstore had. While figuring out what to read next, I picked this up, because of its short 186 pages, a bit longer than a novella by today’s standards.

However, it had the plot and action of a 500-600 page epic fantasy. Complete with a map in the front, a travel up a trail through barren wastelands and into frozen tundra, we get the full gambit of classic adventure here. The cool twist is that while this has a fantasy world, it’s one that’s dying where the powers that be are quite afraid of the pending revolution that will come due to an influx of new beings from the stars.

Hmm, sounds like a perfect metaphor for the #PulpRevolution.

At every turn, those powers, called “The Wandsmen” chase after our starfarer Eric John Stark, to try to stop him, as it is prophesied that he will bring down their world. Lots of action along the way, and also a nice little romance thrown in as well. Leigh Brackett’s writing is gripping and interesting and I can’t wait to read more, as there are two more installments of this world. I also learned that the character was from a past series as well, which I’ll happily visit in the future.

The only complaint I have is that there are some things glossed over in the name of expediency that I would have liked fleshed out a little bit more. The movements are pretty sudden,giving little sense of time or break between the dangers that the protagonist faces. For this, I have to say it’s a somewhat imperfect work, but still a really fun one and for the price and length, certainly worth reading. 4/5