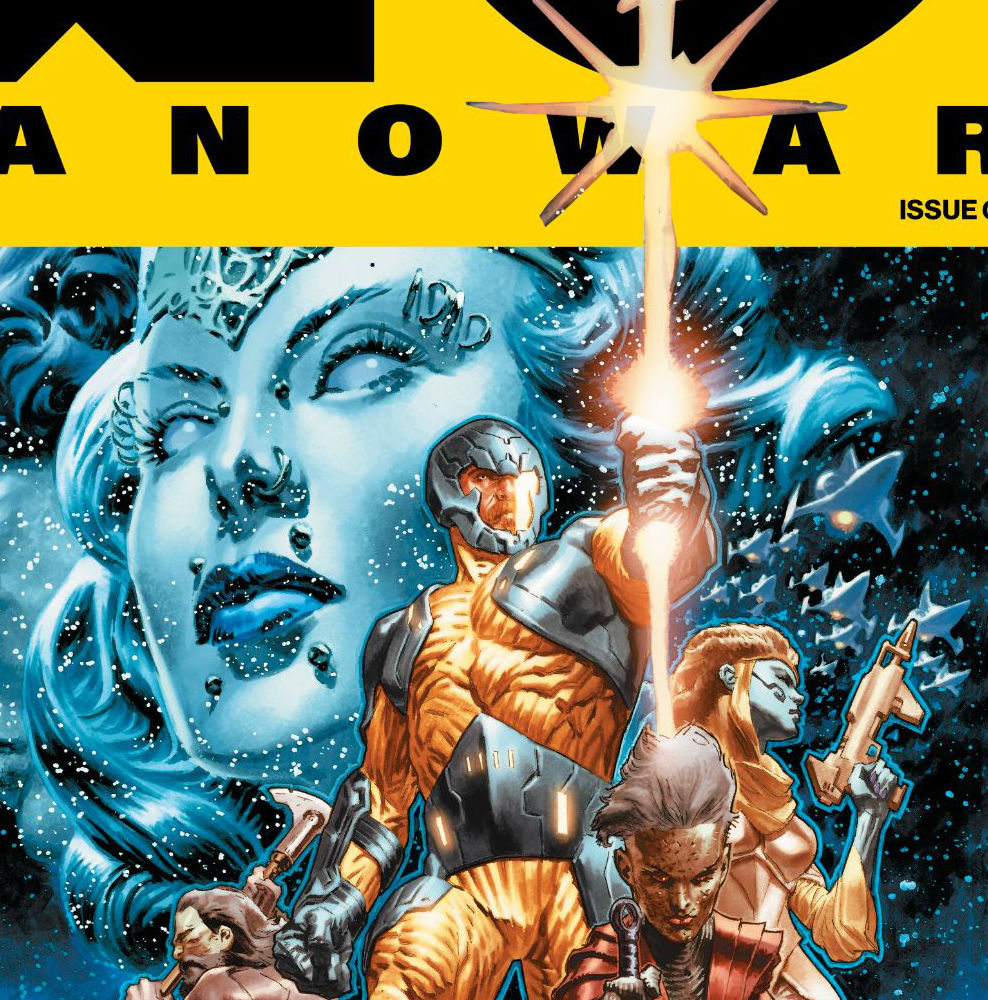 XO Manowar #1 came out yesterday, a relaunch by Valiant comics who already relaunched the 90s property in 2012, which from my cursory look on the internet met with great reviews. I’ve actually never read either prior incarnation of XO Manowar, and am coming at this as a new reader, which probably is most helpful in a review for potential new readers.  My cousin had the #1 variant back in the 90s, shiny cover as I recall (I could be wrong, it was the 90s) but I never picked it up, already having my budget in comics extended far more than it should have been. I’m not sure why I missed the original relaunch, but I did, and it looks like it had a pretty successful run.

This new incarnation is written by Matt Kindt and drawn by Tomas Giorello, neither of whom I knew much about before yesterday and doing a cursory google search. Frankly, I think the time is ripe for Valiant to be doing a relaunch of something anyone might have remotely heard of from the 90s. Going into comic shops lately has left me scratching my head. I’ve been STARVED for something new to read that catches my eye. I saw the work via Twitter that Valiant was doing by supporting local comic shops and really getting out there for retailers, and, as the former owner of a comic shop myself, that impressed me as well. The team looks like good, intelligent people. The kind I like to support. The question is, how is the actual comic itself?

What drew me in was the cover. The bright yellow with the huge logo and a Star Wars/ Princess of Mars style art on the cover that screams classic adventure sci-fi to me. It’s gorgeous, bright, fills me with anticipation to open up the book.

Inside, it starts with a scene of a guy who’s kinda “retired” from adventuring, farming, just doing his thing. It reminds me a bit of Rogue One’s opening where the bad guys flood in and force the guy back to work. This had the guy forced into military service. We see within the first few pages the guy is strong, cautious, wise, has a history of adventuring with some weird gadget thing, is alpha and good at getting the girl (even ones with tails…) and someone you generally want to root for as a reader. The army looks like a cool sci-fi group, further reminding me of Princess of Mars or classic adventure fiction.  I like how the aliens refer to him as “Aric of Urth” which if you say it out loud makes sense how it would be twisted like that by a foreign culture.

Adventure ensues, as our hero goes into a hopeless suicide mission of a military situation, people dying all around him, he runs a gauntlet of death and cool sci-fi devices against aliens, with a hopelessly undermatched group. He uses both his wit and strength to guide him through the situation, totally as a solo individual and without some powers, which I assume are going to come later through the mysterious orb that was introduced in the book. It’s somewhat decompressed like modern comics, building to a trade sized story for sure, but at the same time I feel like I did get a full helping of story, unlike a lot of comics these days. It helps that they did a 40-page issue—and my first thought was how are they going to make money at $3.99 with this any pages?  Perhaps it’s meant to be a loss leader, but I was happy with how much I got on the story front. Kindt did a fantastic job of providing real adventure, bringing me back to the golden age of sci-fi storytelling that makes me yearn for more.

The art is great as well. I would say this is completely top notch, far better than I would have expected from a small publisher. It outdoes most Marvel/DC books I saw on the shelves. Good expressions, great detail work, wonderful shading and lighting effects. The artist drew some super creative gadgets and aliens too which look fantastic, unique and memorable. I really couldn’t have asked for better on this book.

Overall, it’s just a teaser of a story. We have our hero operating without his powers, running the gauntlet, being called back into action, and we’re still waiting for more. It’s a little tough to judge until the full arc comes about, but if Kindt continues with the brilliant adventure fiction as this book gave us a glimpse of, with homages and respect for the past pulp era, I think we may have 2017’s best comic book on our hands. As a new reader who’s never looked at Valiant or XO Manowar before, I was given enough info for this to be a perfect starting point, and the story gripped me from there.

Appendix N and #PulpRevolution people – this is the horse we should bet on. I think XO Manowar may be right up our alley, and highly suggest you take a look for yourself. Even though I said in past blogs I’m done with pamphlet comics with the way trades have taken over, I can’t wait for #2.