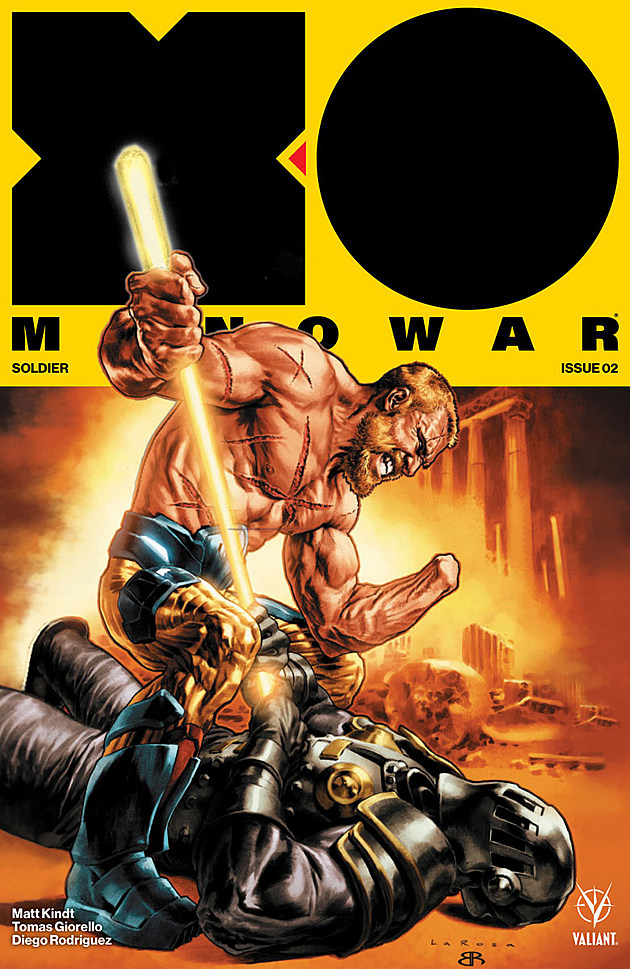 A few months ago, I swore off of individual comic book issues forever. On a whim last month, I picked up X-O Manowar #1, and like comic book superheroes who have their epic deaths – it didn’t last long. I was so impressed by the issue that I went out and bought the pre-order bundle through Issue #9.

Issue 2 continues where Issue 1 left off – Aric, the reluctant hero in the midst of a battle where he’s been conscripted to fight, but does not want to. He blames his former armor on engaging him in conflict, as if that set his destiny, but all the same the is of a 5th century warrior in thought, and so battle is all he knows. It’s such an interesting moody, brooding character that Kindt presents, feeling a lot like classic Tarzan or Conan, with a bit of a science fiction twist to it. Issue 2, like Issue 1 is an action packed battle where Aric is yet again proving himself by breaking into an enemy stronghold and causing havoc.

Kindt has continued with the introduction of who Aric is without the armor storyline, which is a good way to get us attached to the character and not the concept of the superpowers. It’s a writing humanizing trick of “superman loses his powers” that I’ve seen in comics before, but this is a very different take on that concept. Aric isn’t invulnerable physically, but he shows a shrewd ability for combat, to root out any schemes and to overcome obstacles with both his tactical ability and his own brute force.  Where Kindt differs from a lot of the powers-removed type storylines is it IS packed full of action all the same, and that’s why it works..

Aric succeeds a second time where it should be a doomsday mission – in a lot of ways the issue feels very similar to the first, though there is this looming sense of dread now as the captain of the army he’s fighting for is getting jealous, and actively trying ot get him killed as Aric gets accolades.

We do get introduced in this issue to some of Aric’s compartriots who I presume are going to end up as a bit of the supporting cast. We get a nice recap and name/description of the aliens we’re meeting after a couple of pages of action. I like that this comic starts with action, then rolls those credits and gets back into it rather than opening with a bunch of description. It feels much more cinematic that way.

With the preorder edition, we also get some commentary and some of the sketch art which is pretty cool. I found this fun and look forward to it in other comics.

The issue ends with a build to more battle to come.

I feel like at this point we could have taken a little step back and perhaps gotten a little more character meat, but I acknowledge that I’m used to reading trades and not single issues at this point. I want to know a lot more about the enemy we’re fighting, what world this is and what this conflict is all about. Though the action has been straight up awesome, it does need some of those details. If I get that in issues 3-5, then consider this minor complaint to be resolved.

Overall, I’m still very interested, still very engaged and when I flipped to the last page I definitely did a “Ugh, that’s it?!” which means Kindt has done a great job of hooking me through two issues.

Then there’s the art. Tomas Giorello just does humans, aliens, everything so beautifully. He doesn’t skimp on panels. There’s a lot of details, it’s full, it’s action-packed, it’s got pulp-action combined with realism in the best way. I can’t believe how good this art is, it’s really some of my favorite ever. There’s a big splash page with Aric recovering from a wound and felling an opponent and it’s something that I want to get original art of and hang up in my office. So pretty.

Overall, 9/10. I think Issue 1 was a bit stronger as it had a little more of a “wow I wasn’t expecting this” factor, and 2 did in some ways feel a little repetitive of 1, but not all in a bad way. The New Aric is still being established, and showing his huge prowess in battle is a great way to do that. It’ll prepare us for what’s coming ahead, I’m sure. I’m intrigued by the character and the world and I want to see desperately what it takes to get him to resign to putting that armor back on.