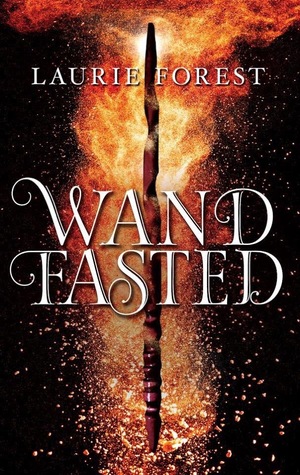 I’ve been saying that within 2 years, Laurie Forest will be one of the biggest, most respected names in fantasy. Her new novella, Wandfasted, will go a long way toward making that reality.

It’s a longer novella, almost full novel length, which is good bang-for-your-buck in terms of entertainment/cost value. And actually, it’s almost two separate books in terms of what happens in the story. I’ll break it down as such:

If you view it as that going in you’ll have the proper expectations for the book. And both components to this are masterfully done. That first 20% flew by so fast that I felt like I was in a whirlwind – just as the main character Tessla certainly is throughout these events. It’s so emotionally gripping and exciting throughout this portion that it really shows her breadth and depth as a writer, even if her bread and butter comes from the latter portion of the book. I love the way magic is used and how it’s dangerous for someone untrained who might burn themselves out, and actually the whole concept of Wandfasted. Really it brings me back to memories of Robert Jordan’s Wheel of Time with his Aes Sedai, and that is ALWAYS a welcome feeling.

What’s great about this first 20% though even more is what it does for The Black Witch. One of my issues with that book is we kept getting shown how bad the Gardnerians were acting to everyone else, and it almost seemed unjustified that they acted like that. I was hoping it wasn’t a direct allegory for LITERAL NAZI throughout that book, but at times it felt like it. Wandfasted fixes that issue I had with the book as it shows a tragic past of how they came to get so paranoid and angry. This backstory was a tremendous help to The Black Witch and I recommend reading Wandfasted first because of that.

Once we get past the initial war shock, the really emotional war elements where the character loses everything, Tessla is thrown into another whirlwind of sorts, this time a romantic storyline. I won’t press the details as the author has gone to great lengths to set up the beginning to leave you guessing who’s going to be her paramour, but suffice to say it’s satisfying.

Forest’s descriptions of the romance, the building tension, the frustration that the characters feel when they’re not able to fill it is extremely vivid. We learn a little more about their magic in the process. The pace does slow down quite a bit from the first 20% where Tessla was in the middle of a war and unsure of what’s going on, but it fits the story well. These characters become even more real and detailed as it goes on. There are some descriptions and points where it gets a little dirty for a PG-13 rating, so do keep that in mind while reading. That said, this quite possibly the most intense, best romance I’ve ever read. The way the situation happens, the awkwardness and anger that translates into intense love is extremely gratifying to read.

Also for my readers, I will note that there’s a lot of talk about rumored homosexuality between characters, and one certainly is, though that activity is not shown in the book. There is a message of society condemning this is bad, though it is focused toward a good message of “don’t ostracize people for being different than you” more than praising any certain behavior. Unlike The Black Witch, I don’t feel like the message interfered with the fiction at all or slowed the book down. I would say a couple points felt like the character thought a little too modern for her understanding of this low-tech world but I did not get thrown out of the story at all.

A lot toward the end of the book mirrors what happened with The Black Witch, which I believe was intentional. It’s a nice set up to the world in that regard and some good foreshadowing of the larger novel. I wanted to see Tessla’s progression as a mage a little bit more… but hopefully that just means we’ll get a sequel.

I was gripped from start to finish, and so far, this has my vote for best novella of 2017.