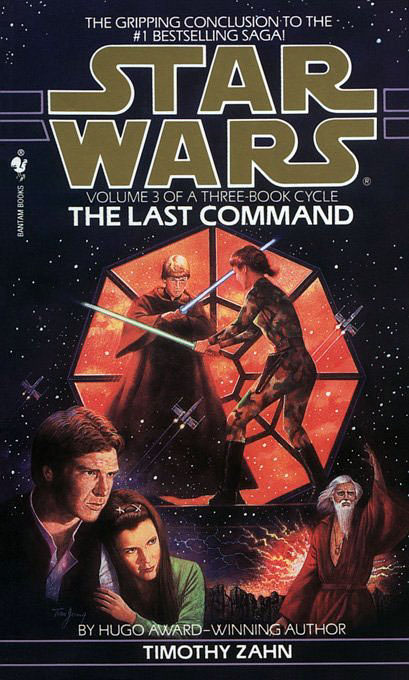 Earlier this year I was pretty excited to find that Timothy Zahn had a new Thrawn novel out. The original trilogy was something I found exciting in my youth, and I was eager for more with this character, which they’ve actually done a great job of incoroporating into the Rebels tv show as well.  It’d also been more than 20 years since I read the original books, so I wanted to check them out and see if they held up to the test of time first. You can see my reviews of Heir to the Empire and Dark Force Rising to see what I thought so far.

The Last Command didn’t let down. It opened up in some nice battle that drew me right back in to the book. At this point, pages 50-125 perhaps, I think it dragged a little compared to the rest of the series. It fell into the standard trap I see in some books of “oh this needs to be a standalone book, so we’ll give you the lay of hte land” with a lot of dialogue really geared toward telling us how much Thrawn was some strategic wizard and how dangerous he is, which we already knew.

However once it got past that, this book flew. I couldn’t put it down for a moment. The development of Mara Jade was beautiful, and I would say that actually the character that ended up iwth the most development, and is most underrated from the series is Captain Pellaeon. His arc of training from Thrawn is really fabulous. It’s amazing that Zahn not only managed to create such a great villain in Thrawn but a sidekick villain I care to read more about. Expert writing on a level beyond almost everything else, tie in or not, ever written.

In a book like this it takes a lot to make you care about characters who aren’t Luke, Han, Leia, as we all come in for further adventures of our great heroes, but Zahn’s creations really shine and even sometimes outshine the originals. C’Baoth as a new dark jedi is actually more interesting than the Emperor in the original movies in a lot of ways as well.

The only character whose arc felt flat to me was Karrde, as he went through the same Han Solo/Lando arc that we’ve already seen with those characters. I vastly prefered the darker criminal elements to him in the first ocuple books than I did in this one where he’s all in on the Republic side. He ended up a little boring as did his segments from his perspective.

Even with that though, that’s minor. Zahn’s writing is so strong that even the parts where I didn’t like were fine. He has a nice descriptive sense that’s not too bogged down and communicates scenes well.

Not much to say about the main characters themselves. They felt real, Zahn could have written the scripts with them and i would have never noticed a difference other than the developments they’ve made in time. The dialogue between them was great, about as well done as can be asked for on that front.

The big epic finale conclusion battle is about as good as it gets in fiction as well. I usually skim through battle scenes hard because they overdescribe elements and tend to make something imminently skimable, but The Last Command is relaly battle done right. There’s character development mixed into it, tension and twists like I’ve never seen. Brilliant and beautiful, and once more, better than the original movies.

I may actually go read The Hand Of Thrawn series because I liked this so much, and apprecaite Zahn’s creations and contributions to this universe almost more than the originals, even though I wasn’t intending on reading more Star Wars books. One can only lament what could have been if Disney/Lucas developed this into film rather than the uninspired marketing-driven nostalgia pieces that they keep putting out that are devoid of feeling.