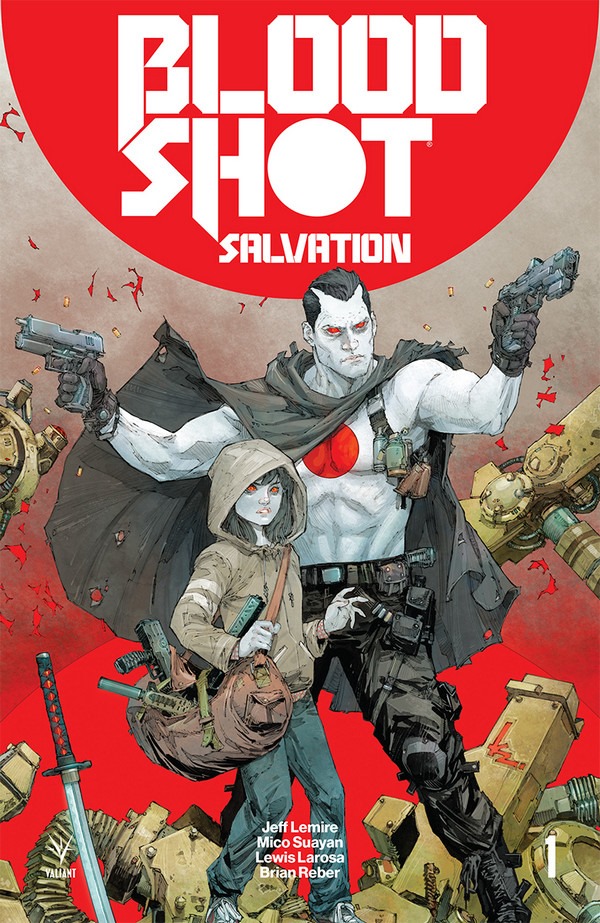 Bloodshot is a character from Valiant Comics who is kind of like a cross between Punisher and Wolverine. An experiment from a secret military organization, Bloodshot is infused with nanites that make him a killing machine and give him regeneration powers.
This book continues with the feel of Bloodshot: Reborn, much more than the crazy/zany epic Bloodshot USA mini-series that directly preceded it. I would recommend reading both (no need for the 2012 Bloodshot series which doesn’t really have the same feel) before getting into this. Bloodshot has a baby and him and his girl Magic are on the run, trying to live normal lives. There’s a project omen happening from the evil government mooks and Magic’s father is a weird creepy dude who’s calling and saying awful things to her. It went back and forth between now and a “soon” when baby bloodshot is a bit older, an interesting way of doing things, will have to see how that develops.Characters great. I love it all. I didn’t love the fighting between Magic/Bloodshot but these are messed up characters so it’s fitting with the way they are. I kinda want my heroes a little more heroic when it comes to home life, but that’s a personal preference. Though nothing BAD happened, there were points where it made me uncomfortable. But… that’s a testament to how much I care about the characters, so maybe it’s a plus.

Pacing was a bit slower than the last Bloodshot series. Bloodshot: Reborn did open with pacing like this, but part of it felt like it moved a little more quickly. Maybe it’s the now/soon vs. the way the Reborn plot had an FBI element to it that was intriguing. I’m ready for a return to real action after that introspective run, however. Bloodshot USA really pushed the action and it got me itching for it. I’d dock a couple points here on that level

I’m a -bit- worried about political signalling. It’s not all that bad but there’s mentions of racial killings, the bad father is of course a church leader of some sort (was clarified with cult but still ehhh…). Nothing really bothersome like we see from Marvel but I hope it doesn’t mean the books’s going there in the future. Lemire did say in an interview with Newsarama that he meant to go further, but dialed it back in later drafts. I think that was a smart choice if that’s the case. We need less political nonsense in comics. As it is, no points docked but I’m paying attention on that level because I think there were 3 lines of it — one or two is easy to glance over once it’s three it’s a pattern, something I pick up when I’m editing as a writer.

The art is fabulous. I love the style. Love Lewis LaRosa. This is top notch and it’s where Valiant books have been standing out above Marvel/DC lately. Nothing negative there. There’s a bit much on the talking heads back and forth layout wise but I think that’s a script issue getting back to the pacing more than anything to do with the artist.

Overall, solid start. I’m definitely interested in more though part of that is trusting Lemire to wow me like he did in Bloodshot: Reborn.