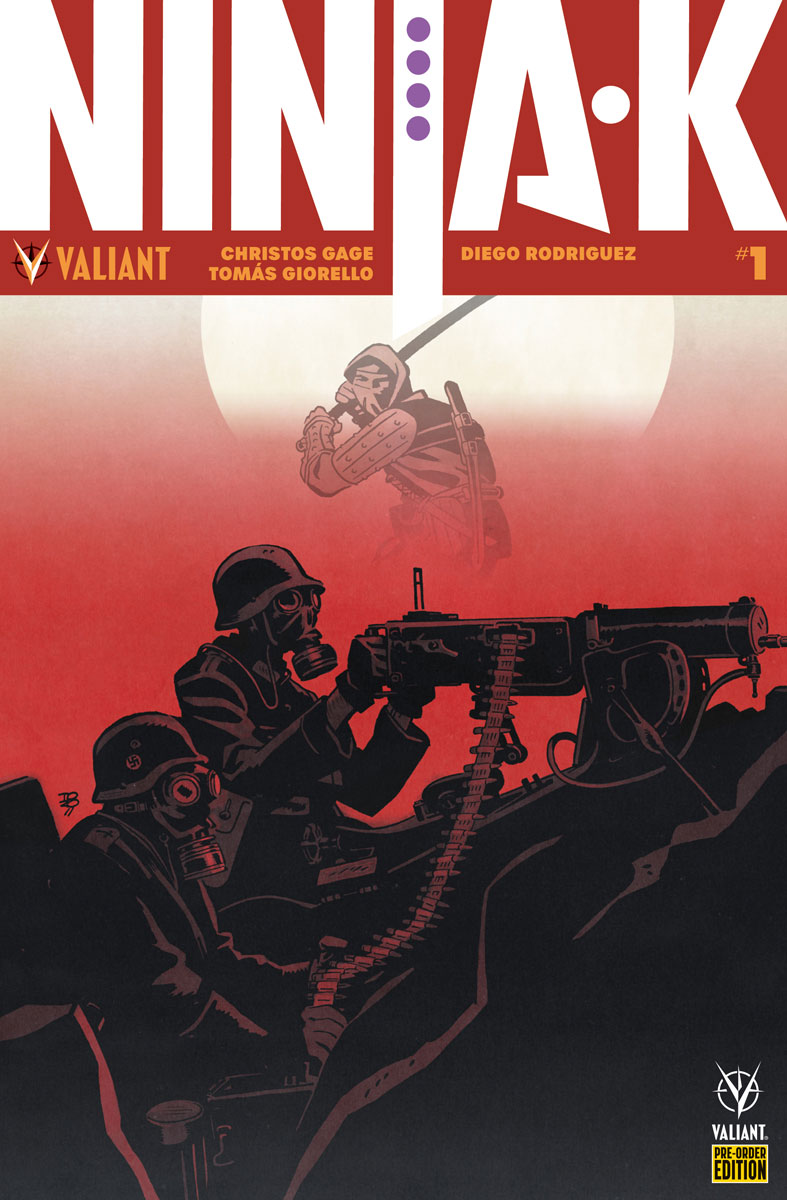 The premise of this book is a relaunch (not retcon or reboot as it seems to follow the continuity and actually care about what Kindt delivered, actually referencing it in the script – which there’s a portion of in the Pre-Order edition I read), is someone’s going around killing all of the prior Ninja operatives still living. This is a 40 page book, and there’s a lot of interesting ideas, and issues with the writing in general, which i’ll get to in detail.

Conceptually, having a Ninja program with an A-K is pretty interesting. I don’t know if this was established in continuity before, but it makes sense and the history is interesting.  The problem is, leading the book with 8 pages of the history of the program and not just getting right into our characters we’re supposed to care about is a weird way to open a comic. The pages look like pin-ups as someone voices over talking about it, we eventually learn is Ninja-D about 4 pages in.  It cuts eventually to him as an old man and Ninja-K talking, where he asks Ninja-K if this was useful to him. It suffers from a “show don’t tell” aspect of comics in that it delivered us far too much backstory. I get Ninja-D needed to be established as someone important, and the history was important as well, but the lengthiness of it poses an issue.

Especially as it goes into a scene of Ninja-K going over in his head Ninja-D’s “rules of the trade” while he’s in battle in China, rescuing a kid from people we don’t learn much about. It’s a throwaway intro to show us the gadgets, his prowess, his abilities and establish we have a bonafide Ninja. This creates a problem as we already had 8 pages of establishing background, so we’re a full 16 pages in before an actual story starts. Now these pages were a bit more fun and enjoyable to read, but didn’t really grip beyond a generic fight.

After all this intro we are TOLD (not shown) Ninja-D has been killed. Ninja-K already knows and is gonna investigate. Very little tension.  Now this could have been way more interesting easily by having Ninja-D talk to Ninja-K on a call about the rules, training, history, while Ninja-K was fighting. Maybe even a flashback side-by-side comparison sequence to get that history in. The line goes dead after some gurgling, Ninja-K panics and flies back to see what’s going on.  An intro could have been done in half the pages that way and been much more exciting.

We cut to pause for a few pages of relationship drama – which is actually fairly good. I liked where it went on that angle, where Ninja-K is sleeping with Livewire (another valiant hero) which I’m going to assume was established prior to this. She’s not happy with the shallow level of their relationship and it kinda blows up. Solid few pages here.

That leads to the only SJW virtue signaling moment of the book. Ninja K after having the fight goes down, starts talking to himself in a line that added nothing and would have been easy to edited out and not play social justice politics with.  “You can seduce targets of any age or gender in twenty four languages if you’re being paid to do so…”

Okay, it’s weird enough someone talks to themselves (should have been dialogue box probably), but in the mental commentary we’re really worrying about “any age and gender?” It just made me roll my eyes as that line reads like it was out of Teen Vogue, not a super bad ass British agent.  It could be shortened to “You can seduce any targets if you’re being paid to do so…” and would have come across far more natural without the rather pointless signaling. This stuff isn’t brave or interesting in comics anymore, it’s just annoying and throws people out of the story. And the more I look at it, it’s got pedophillia implications I am really hoping are unindented and just missed by editorial.

It follows the rest of the book Ninja-K investigating and trying to figure out who killed them, with an explosion at the end.  There’s a lot of telling of the past, speculating on past villains like Dr. Silke (important in the Valiant Universe) and a femme fatale type who I’m going to guess is the major villain when it comes to it (we haven’t seen, we just have explosion).  This is the meat of the story, it’s pretty good, and though it’s almost all talking back and forth, it’s pretty interesting and tense, especially in the last couple of pages.

If they’re going to do 40-page comics, they need to pack more story into it than this, in my opinion. The set up took way too long to get to, in something that without all the exposition, we really could have gotten to in 2-3 pages to kick off the better action adventure.  Page 1: “Ninja-D, my mentor, is dead.” Page 2 “Who could have done this?” Maybe the femme fatale? Page 3: Explosion of the whole house!  Flip and let’s get into the action with the real bad guy.

The exposition didn’t add enough interesting worldbuilding or character (aside from the Livewire interaction) to really justify much existing. The story really only got started in those last couple pages.  If you wanted to layer in some more exposition, could flashback a little after that but on the storytelling level, it’s a bit disappointing.

Character wise, they all kind of talk the same. There’s one British dude who actually sounds British – he’s the guy questioned late in the book, but everyone else sounds pretty American. Same cadences, same verbiage. Everyone talks to themselves at that (shouldn’t have been more than one character doing that, it stands out when it’s multiple), and so the characters come across a little flat too.

Now it sounds like I’m roasting the story, but it’s got some potential. There are interesting concepts, interesting ideas where it could pan out over the next couple issues. With 40-page comics, I’m happy Valiant is trying out pushing the boundaries on that front too as most comics stick to 20 for monthly production.  The end pages was enough of a hook I’ll keep reading, but this story wise was a tough first issue that should have had more meat to it.

On the art front: Tomas Giorello makes it all worthwhile. I can look at the pages and they’re so beautiful I don’t care about anything else. Perhaps they were thinking that, and made this more of a pin-up book for him than anything else, and it worked to some level. His masterful and beautiful art made it a joy to flip through the pages, and almost made me forget the story issues until I went back and thought about it afterward.  I really loved his Femme Fatale late in the book, one of the most beautiful drawings of a woman I’ve seen in a comic in a long time.  I mean wow! No complaints there at all. The coloring is a bit on the darker side, but it works for the book as well.  I hope they can keep up the quality when it rotates artists on this monthly book, as I know there’s no way someone can keep up a 40 pages a month schedule for long.

Overall, the art saved it. An intriguing premise, but the execution really needed some heavy editing, and story wise, I feel we should be well into wherever issue 2 is supposed to be rather than where we’re at.  I’m still on board, but I really hope issue 2 has more meat to the story.