It’s that time of year again. Last year for 2016 I nominated two very cool sci-fi stories, which I wanted to raise awareness for. For something like this, I like to try to put something out there not just that is great, but that other folk might not nominate because it didn’t cross their radars.

Most of my reading is in Sci-Fi proper or Mil SF, so it’s actually kind of odd this year that my two favorite stories I’ll be nominating for the awards are fantasy.

I’ve mentioned this several times before but my favorite short story of 2017 was “Trouble In An Hourglass” by Jody Lynn Nye which appeared in Straight Outta Tombstone. This is a weird western time travel adventure that I thought was supremely fun. It’s actually up there as one of my favorite short stories of all time. I’m a big fan of weird west in general, but Jody really nailed it with the characters in this book being people who are relatable. As a testament to how much Jody made me care about them as a reader, I actually started dreaming up scenarios where they have other adventures in my head (which is dangerous because I don’t have time to write more stuff this year!). The science is light on this, which is fine by me. It’s just pure fun. Jody is a big Dr. Who fan from way back, and her love for that style of adventure really shows in this story. It fired perfectly on every cylinder for me from world to pacing to character to concept. Great stuff. 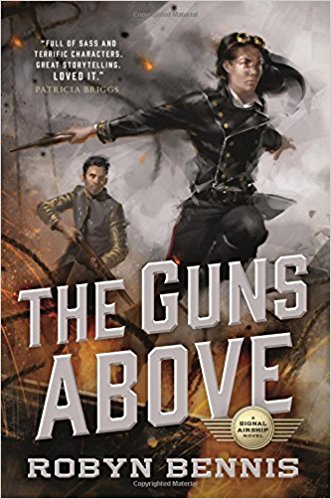 It’ll be no surprise given other awards nominations I’ve been touting that I’m picking Robyn Bennis’ The Guns Above. It’s Steampunk, but it nails the aspects of Steampunk I love: detailed airship combat, a cool fantasy world, exciting war where the stakes are really high for the characters. Tone wise, it’s a little darker than my usual fare, but Robyn propels a beautiful adventure with these characters. Josette is supremely capable as a character, and though she’s also very jaded, it’s fun to watch her progress into her own command. Bernat’s arc, though he’s extremely annoying, is really what makes the book, because it ends up being somewhat about redemption and it adds a little light heartedness to the very heavy story.

Lots of war. Lots of death. Lots of drama. And airship action. Hopefully Robyn will be getting book 2 out here quickly!