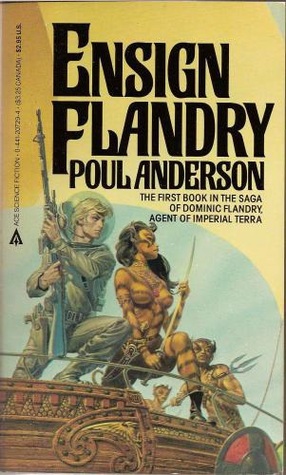 Almost every time I open up a new Poul Anderson book, I find myself overcome with joy. I get strange aliens, a cool world with a lot of conflict, plenty of intrigue and action, and a g guaranteed sense of wonder and just joy of being in science fiction that a lot of modern authors don’t offer.

Ensign Flandry is the first book in a sequence of books in a future history Anderson developed for the period of the Terran Empire. There’s a lot of different books and the reading order is a bit murky overall, but Ensign Flandry is a good place to start to follow this particular character’s adventures.

It starts out not introducing the title character at all, but setting backdrops of both the Terran Empire — showing the decadence and decline of nobility, and a human commander on a faraway planet, where there are 4 species at play. There are two local sentient species, one under water, and one tiger or cat-like species that are fighting for dominance of the planet. The humans have taken the side of the cat species, and the Mersians have taken the underwater dwellers’ side. A series of incidents are escalating between the two and it looks like war is happening.

It’s odd at that point.  I  wasn’t quite sure about the book, though I’ve seen Anderson start books off in strange ways before. It was a lot of set up, and because you’re jumping perspectives so much there’s not a ton to latch onto, so it took me awhile to get into the book. In hindsight, I enjoyed the set up, but it was a strange start during the read of it.

Once we are introduced to Flandry a good seeral chapters into the novel, we find a fun, competent young character who appears as if he has the inexperience and follies of youth, but there’s a lot more to him than we see. He gets caught up in the struggles of the conflicts, and the humans scramble not to have this escalate into a full on war.

He gets conscripted into intelligence, and goes to the Mersian homeworld as part of an ambassadorial delegation. This is where we get some James Bond ish adventuring in space, but with a twist as Flandry doesn’t do a lot of the direct espionage himself. He’s often observing what’s going on and just happens to fall into a part of it, but it really works despite not being in the direct action a lot of the time. Flandry finds himself fooling around with his Imperial nobility’s concubine on the planet and gets himself into a world of trouble.

It only escalates tension from there. The characters are so well done. You end up caring a lot about Flandry and then Persis, the concubine. The conflict with the Mersians progresses in such an interesting and different way as well. It’s very imaginative all the way around.

And then Anderson puts a final twist on it which I won’t spoil. That’s where it gets really interesting. The wrold was so  well developed in this fairly short novel, and the conclusion is entirely satisfying.

I might like this book even better than Fire Time, which is my favorite Anderson book so far. It’s tough to say. This had an extra fun factor to it where Fire Time felt a little more serious. I’m excited to continue this series and  read more adventures about Flandry.  Baen  has done a great job collecting these in their “Technic Civilization Saga” series for easy omnibus reading.